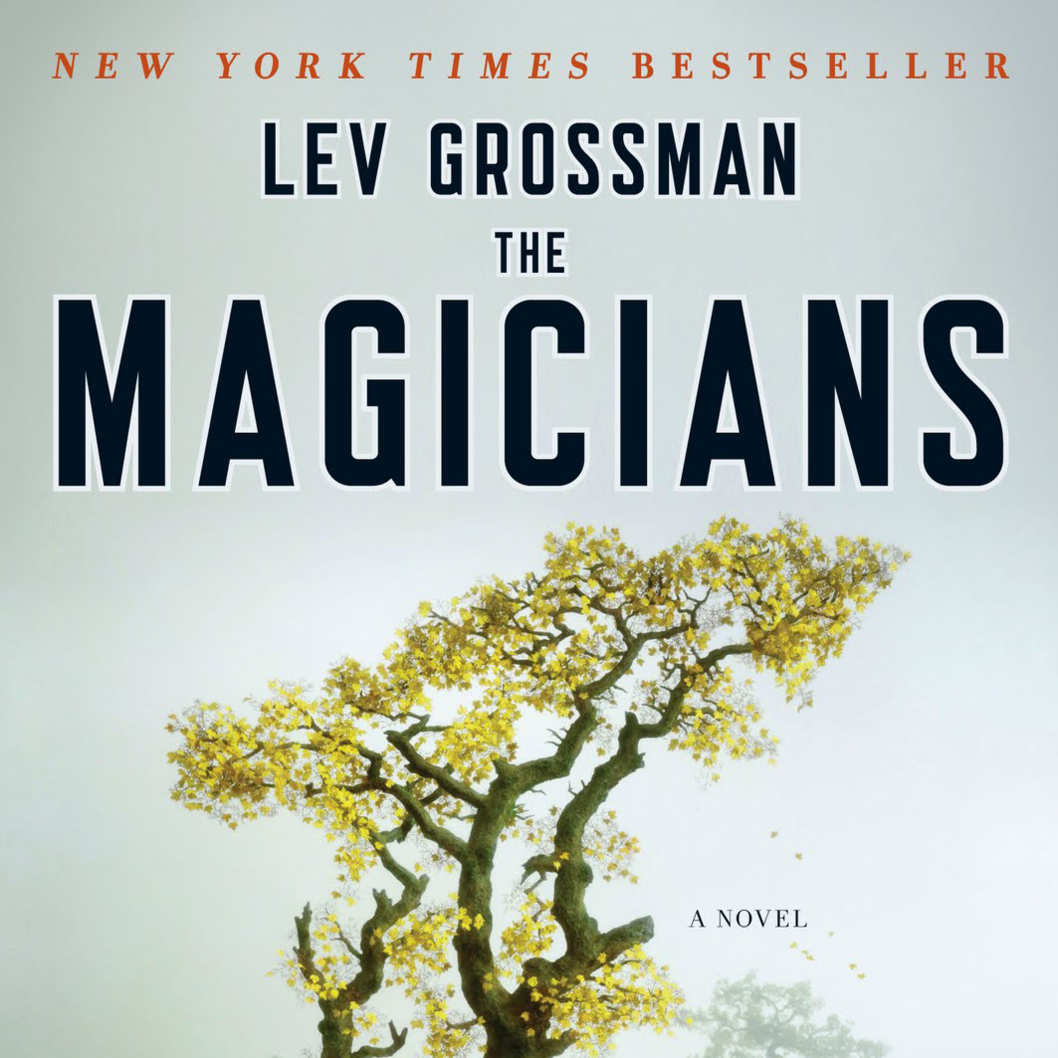 I wish to begin this review by saying that The Magicians by Lev Grossman (2010, Penguin Books) ranks among my favourite books, so my criticism comes from the only place that truly good criticism can come from: fondness. Grossman’s work was first introduced to me by my closest friend, who began his endorsement saying “You need to read this, it’s about you.” The novel is actually about a painfully jaded high school senior, Quentin Coldwater, who passes an examination to enter a secret magic college, Brakebills, for the hyper intelligent: a sort of Hogwarts made up of Einstiens and Da Vincis, which is not so much an allusion but an explicit reference.1 Unlike Harry however, Quentin is not anyone special; he is not a chosen one, there is no prophecy, no evil wizard bent on world domination to defeat; there are “too many magicians, not enough monsters.” In fact, Quentin’s greatest enemy is himself and his own sense of self-importance, purposelessness, and insecurity. He is constantly looking for greener pastures, even when moving through the various cliques of Brakebills, into the magical underground of NYC, and even into the Narnia clone that is Fillory; “If you will, for just one second, look at your life and see how perfect it is. Stop looking for the next secret door that is going to lead you to your real life.” These words, spoken by Quentin’s lover Alice, sum up the true conflict of the novel. Quentin gets everything he thinks he wants, but is still unhappy.

In many ways Grossman’s work is anti-fantasy; it is satire rather than parody. There are no epic heroes like Frodo or the Pevensies, no wizened but compassionate mentors like Gandalf or Dumbledore, and, ultimately, no villains to be conquered like Sauron or Jadis. Even the main antagonist who threatens the natural order of Fillory, The Beast, is more of a plot device than an essential character in his own right (He doesn’t even receive a proper name until the chapter he’s dispatched). Instead our protagonists are their own antagonists. Even looking beyond the already mentioned character flaws possessed by Quentin, the ensemble cast follows suit; Elliot is an alcoholic who resents his dependency on the other characters to keep him aloft. Janet, unloved by her own parents, seeks to fill the missing love in her life with the homosexual, and therefore unattainable, Elliot, or destroy the love enjoyed by those around her. And Alice is so painfully shy and crippled by the loss of her brother that she can’t or won’t recognize her obvious talent until the third act (an acknowledgement which promptly leads to her death). Even Josh, the gentle giant, who is otherwise the comic relief is crushed by his own perceived inadequacies and unreliability in magical talent.

It is inadequacy that chiefly defines the conflicts of story, whether it be the inadequacy felt by the characters in themselves, or felt by Quentin in his expectations for his life. No more clearly is this expressed than in the following narration; “He was drowning – why did he recoil whenever anybody reached down to help him? The professors Quentin talked to about it didn’t seem concerned at all. They didn’t get what the problem was. What should he do? Why, anything he wanted to!”

Even the characters’ dialogues betray their uneasy position. Though witty and oftentimes sardonic, Grossman’s characters are like middle schoolers at their first dance; self conscious and bashful. Banished from Grossman’s work are the natural friendships of Lucy and Mr. Tumnus. Gone are the unashamed discussions of brotherly love, loyalty, and duty between Aragorn and Boromir. Forgotten is the unapologetic nobility and earnestness of belief, either in God or merely justice and goodness themselves. In fact, the only openly devout character is Richard, an older classmate (and another paramour of Janet’s) whose presence is so brief and negligible that outside of one dinner party, the only scene he speaks is to announce his departure from the group, and thus, further relevance to the narrative. One wonders if he wasn’t included merely to feign interest in the spiritual aspect of the man’s life, while quickly hurrying past to get on to more important matters.

But just what are these more important matters? Much of the book is taken up with a seeming listless energy. There are a minutiae of conflicts that Quentin and his friends face: exams, Quidditch Welters championships, the logistical nightmare of planning the aforementioned dinner party, but there is nothing pressing upon them to prompt real action or, even more pertinently, change themselves. As they say, the stakes have never been lower. In traditional story structure, the call to adventure doesn’t come in until well after the first two hundred pages, which is not necessarily a problem in terms of pacing unless your total page count is just shy of four hundred as Grossman’s is.

Even when Quentin and company do respond to the call to adventure, the entire plotline is resolved in scarcely a hundred pages, less than a third of the total word count. The relative ease (though, to be sure, not without sacrifice) with which The Beast is defeated and order restored to Fillory only underscores the pointlessness of it all. If the ultimate conflict is really between Quentin and his inner demons then The Beast and Alice’s deaths, are plot devices to this end. And this end is not a definitive resolution, but just a continued ennui and reaction to events, rather than direct ownership of Quentin’s own agency. Of course, it can and should be remarked that this is merely the first of a trilogy of novels, wherein many of these characters do find substantive change and progress; however, I believe it is equally important that a work be examined on its own, especially considering the Grossman didn’t even know himself if the story were meant to continue.2

So why would I start this review by saying a work with such obvious flaws is among my favourites, and why can I so willingly admit to identifying with Quentin? I think it’s because I was Quentin, and this book helped me to realise it. I was, with more than a touch of arrogance, a smart, high-achieving high schooler with a penchant for depression and wishful thinking. I spent the better part of my childhood being told I was intelligent and I imagined myself going on adventures with Harry, Frodo, and the Pevensies. Being an only child, like Quentin, I either escaped into the world of fantasy or had to acclimate to the adult world of my parents and their friends. I, like Quentin, dutifully pursued academic success hoping that it would provide an escape like in the stories described. I, unlike Quentin, did not find the secret world at the back of a closet or through a secret garden wall.

If The Magicians is about the futility of achieving your goals, then it is the anti-fairytale of our time. The vanishing “American Dream” of the past, a codependent commitment to salvation by connective networks on the web, and alienation within and without our society is the inheritance of this generation. Our fables, our heroes, and our telos have all been reported false or dead, so what are we to do but follow Quentin into resignation? Compare this to the message reported by Lewis; “Since it is so likely that (children) will meet cruel enemies, let them at least have heard of brave knights and heroic courage. Otherwise you are making their destiny not brighter but darker.”

So has Grossman condemned us to darkness rather than the light of inspiration? It is certainly correct that he has struck a true chord of postmodernity, but does this mean that our fate is deterministic? Certainly not. As G.K. Chesterton wrote; “There is one metaphor of which the moderns are very fond: they are always saying, ‘you can’t put the clock back.’ The simple and the obvious answer is ‘You can.’ A clock, being a piece of human construction, can be restored by the human finger to any figure or hour.” Likewise, the stories we tell are but human inventions, though powerful stories are always inspired by a superhuman intellect. As such, the response to the ennui of Quentin and the modern hero is not a dogmatic insistence upon the futility of heroism, but a return to the genuine audacity of the earlier age which dared to say, “Yes there is darkness, but the light will overcome.”

This will be no easy task, and no creator, literary or other, can effortlessly overcome the zeitgeist of his time. But to adopt another maxim, nothing done right is ever easy. We need to respond to the hopelessness of our time with imaginative hope. The greatest gift of an artist is not merely to paint the world as it, but as how it should be. Man is the storytelling creature, now we must decide what sort of stories shall we tell; hope, or resignation? Now is the time to decide what the tone of our fantasies shall be.