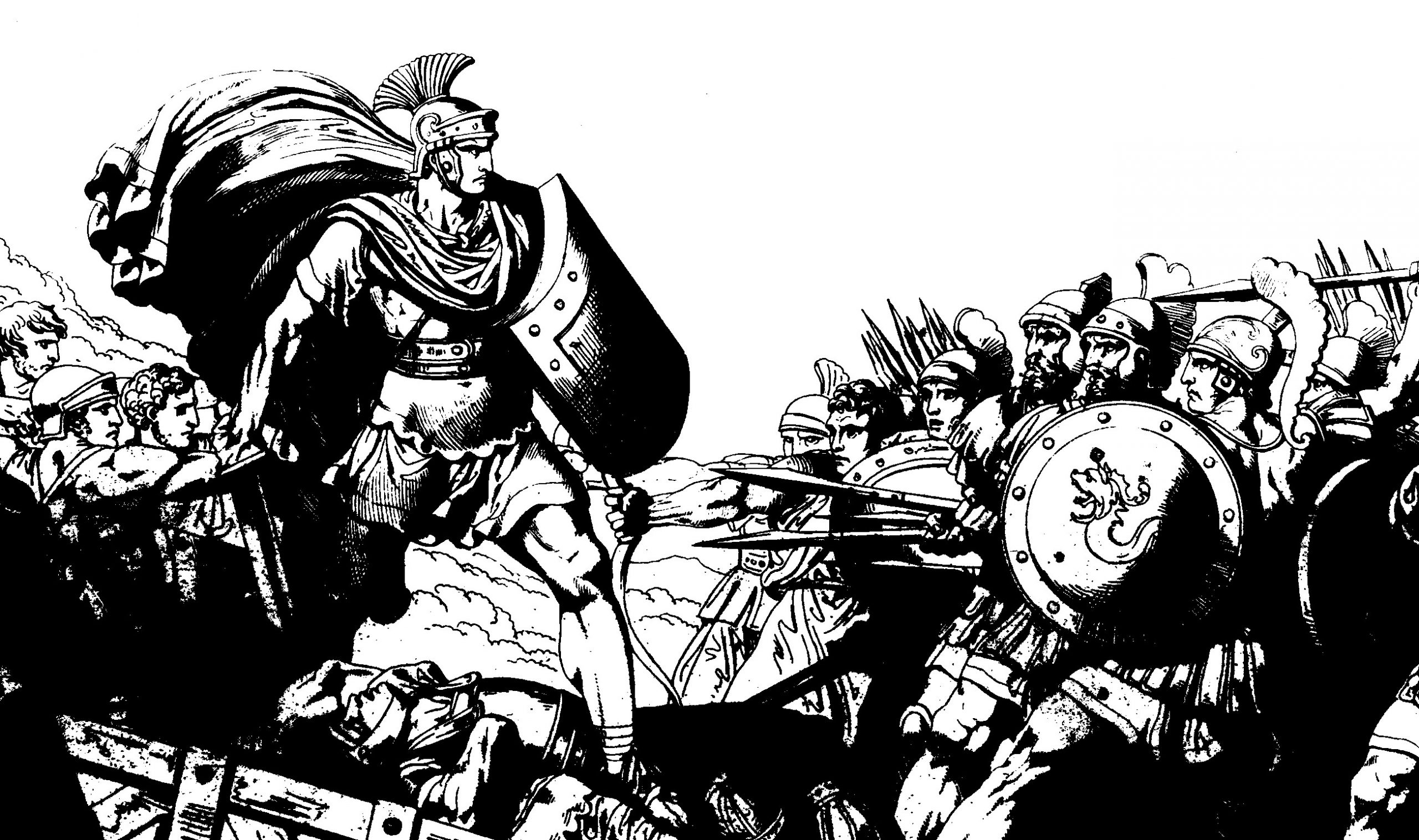 Then out spake brave Horatius,
The Captain of the Gate:
“To every man upon this earth
Death cometh soon or late.
And how can man die better
Than facing fearful odds,
For the ashes of his fathers,
And the temples of his gods,

“And for the tender mother
Who dandled him to rest,
And for the wife who nurses
His baby at her breast,
And for the holy maidens
Who feed the eternal flame,
To save them from false Sextus
That wrought the deed of shame?

“Haul down the bridge, Sir Consul,
With all the speed ye may;
I, with two more to help me,
Will hold the foe in play.
In yon strait path a thousand
May well be stopped by three.
Now who will stand on either hand,
And keep the bridge with me?”1

What is it about this mighty stand, made immortal in the lines of Macaulay, that stirs us still today? For Publius Horatius Colces, life was good: sprung from a noble and ancient line, prosperous, landed, a husband, a father – he was a man with everything to lose. And yet he did not hesitate to venture all on the Pons Sublicius. In pursuit of what? What is this thing which to Horatius was more precious than life itself?

Only one word rises to answer, and that word is glory. Glory lies about Horatius like a mantle as he stands with two companions against the dread armies of Etruria. Glory stirs in our breast when we read of it. The logic is sacrificial: blood poured out like a libation, lives laid down in pursuit of the victory.

The ancients understood well the meaning of glory. This I think is why the Christian faith spread like wildfire across pagan Europe. Pagans understood the Cross, understood it immediately and viscerally, because in the Passion, God speaks to man in the language of glory. Christ stood alone against the powers of sin and death, traded his life for the victory: “Now is the Son of Man glorified” (John 13:31). He emerges from the tomb Christus Victor, and extends his hand to us to join him in eternity: “He who conquers, I will grant him to sit with me on my throne, as I myself conquered and sat down with my Father on his throne” (Rev 3:21). To those who understand glory, such an offer was irresistible.

It has remained for us moderns to forget the meaning of glory. In the famous exchange of letters (in Latin) between C.S. Lewis and St. Giovanni Calabria, Lewis makes a prescient remark:

They err who say: “The world is turning pagan again.” Would that it were! The truth is, we are falling into a much worse state. Post-Christian man is not the same as pre-Christian man. He is as far removed as a virgin from a widow.2

Why is Christianity fading in the West? Because a new race of men has arisen which no longer speaks the language of glory. To such men, the Cross of Christ is unintelligible.

But the divide is not merely between ancients and moderns. In every generation, even ours, there are men who think in terms of glory. And there were among the ancients those who were mystified at men like Horatius, willing to lay down their lives for something greater than themselves.

G.K. Chesterton was not only writing about the Punic wars in The Everlasting Man, but about his day and ours. On one side of history are the Romans, who fought on in the face of manifest defeat – “The eagles were lost, the legions were broken; and in Rome nothing remained but honour and the cold courage of despair.”3 On the other side:

The plain business men of Carthage, thinking as such men do in terms of living and dying races, saw clearly that Rome was not only dying but dead. The war was over; it was obviously hopeless for the Italian city to resist any longer, and inconceivable that anybody should resist when it was hopeless. Under these circumstances, another set of broad, sound business principles remained to be considered. Wars were waged with money, and consequently cost money; perhaps they felt in their hearts, as do so many of their kind, that after all war must be a little wicked because it costs money. The time had now come for peace; and still more for economy. The messages sent by Hannibal from time to time asking for reinforcements were a ridiculous anachronism; there were much more important things to attend to now. It might be true that some consul or other had made a last dash to the Metaurus, had killed Hannibal’s brother and flung his head, with Latin fury, into Hannibal’s camp; and mad actions of that sort showed how utterly hopeless the Latins felt about their cause. But even excitable Latins could not be so mad as to cling to a lost cause for ever. So argued the best financial experts; and tossed aside more and more letters, full of rather queer alarmist reports. So argued and acted the great Carthaginian Empire.…

How could they understand that the Romans could hope even when their fortunes were hopeless? Their religion was a religion of force and fear; how could they understand that men can still despise fear even when they submit to force? Their philosophy of the world had weariness in its very heart; above all they were weary of warfare; how should they understand those who still wage war even when they are weary of it? In a word, how should they understand the mind of Man, who had so long bowed down before mindless things, money and brute force and gods who had the hearts of beasts? They awoke suddenly to the news that the embers they had disdained too much even to tread out were again breaking everywhere into flames; that Hasdrubal was defeated, that Hannibal was outnumbered, that Scipio had carried the war into Spain; that he had carried it into Africa. Before the very gates of the golden city Hannibal fought his last fight for it and lost; and Carthage fell as nothing has fallen since Satan.4

Carthage, writes Chesterton, “had been defeated by the defeated, and almost defeated by the dead.”5 Just so Satan was defeated by a dead man. And we the soldiers in his service lift up the ensign of his Cross and proclaim, “The Galilean still lives.”

Another example from the ancients: When it was reported to Xerxes that a band of Spartans under Leonidas awaited him in the pass at Thermopylae, “He could not understand it;… what they were doing appeared to him laughable.”6 How could these men throw away everything? No one was forcing them – these were not slaves, as Xerxes’ soldiers were, driven into battle by the whip. And yet, in defiance of all logic, there stood the King of Sparta, with three hundred picked men, facing sure and certain death.

Xerxes waited four whole days for the Greeks to realize their folly and disperse – a delay that cost him Greece. On the fifth day, Xerxes attacked; but the Greeks held the pass against all comers. At length, when Leonidas saw that his forces were soon to be encircled, he sent his allies home. Then he and his Spartans withstood the Persian army alone, secure in the knowledge that “if he remained, he would leave behind a name of great glory, and the happiness of Sparta would not be blotted out.”7

Who now remembers the name of the commander who finally drove the Persians out of Greece at the Battle of Platea? His name is inconsequential. The true champion and savior of the Greeks was the man who lay down his life at the Hot Gates. When Xerxes was defeated, and sent reeling back to Persia, it was at the hands of King Leonidas, victorious in death.

When the oldest cask is opened,
And the largest lamp is lit;
When the chestnuts glow in the embers,
And the kid turns on the spit;
When young and old in circle
Around the firebrands close;
When the girls are weaving baskets,
And the lads are shaping bows;

When the goodman mends his armour,
And trims his helmet’s plume;
When the goodwife’s shuttle merrily
Goes flashing through the loom;
With weeping and with laughter
Still is the story told,
How well Horatius kept the bridge
In the brave days of old.8