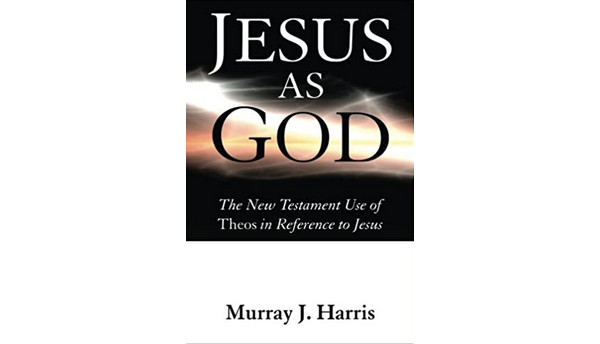 Two years ago, I began to study Greek at the St. Irenaeus Center. Since then, I have been working my way through the New Testament in the original, reading and listening and speaking the text out loud. A few months ago, my studies raised a question about how to understand Titus 2:13 and 2 Peter 1:1, particularly on the placement of ἡμῶν. When I approached Ted on the matter, he walked straight over to a bookshelf, pulled down a volume entitled Jesus as God, and said, “If anyone can answer your question, it’s Murray J. Harris.” I opened to the table of contents – this was exactly what I had been looking for. “May I borrow this?” I asked. “Only on the condition that you write a review with your findings for Faith & Witness.” And that is how this article came to be.

The Church has always existed to evangelize.1 Since the December 8, 1975 apostolic exhortation, Evangelii nuntiandi, we the faithful repeatedly have been told to announce Jesus Christ. Those to whom we herald the good news of eternal life in Christ have an obligation (as do we who evangelize) to answer Jesus’ question, “Who do you say that I am?”2

All of us must answer this question personally. Official Church documents can help, as can theologians exploring the field of Christology. But what of the Scriptures? What of those ancient, divinely inspired writings which give us a reliable witness to the person of Jesus Christ? We must read the New Testament; for within it we discover Christ.3 Page by page the focus is on Jesus; no other documents have such a close relationship to him.4 The ancient biblical scholar St. Jerome knew this, for he warned, “Ignorance of Scripture is ignorance of Christ.”5

Since June 1978 I have been blessed by reading a number of different English Bibles as well as some Romance language Bibles. Recently, however, I have been learning to read the New Testament Scriptures in their original language, Κοινή Greek. This common Greek, the language in which the New Testament was inspired (θεόπνευστος – God-breathed), has provided me with a conclusive, undeniable answer: Jesus is God!

The grammatical analyses provided by Murray J. Harris in his 1992 book, Jesus as God,6 have reinforced my conviction. As a biblical scholar, Prof. Harris applies Greek grammar rules to sixteen New Testament passages to determine whether the title θεός (God) is ever explicitly predicated of the name Ἰησοῦς (Jesus). I will focus on two of the passages, Titus 2:13 and 2 Peter 1:1, which I argue state explicitly that Jesus is God.

Without extensive analysis, we can understand the first four words of Titus 2:13, “προσδεχόμενοι τὴν μακαρίαν ἐλπίδα” means “looking (waiting) for the blessed hope.” However, the meaning conveyed by Paul with the remaining twelve words (καὶ ἐπιφάνειαν τῆς δόξης τοῦ μεγάλου θεοῦ καὶ σωτῆρος ἡμῶν Ἰησοῦ Χριστοῦ) ultimately depends on whether one or two persons are being referred to as “τοῦ μεγάλου θεοῦ καὶ σωτῆρος ἡμῶν” (Our great God and Savior).

There are two main ways of understanding “θεοῦ καὶ σωτῆρος” (God and Savior) as referring to two separate persons. The first would be to read it as an ellipsis, yielding a translation along the lines of “and the appearing of the glory of the great God and [the glory of] our Savior Jesus Christ.” Prof. Harris weighs this option, before ultimately concluding it does not best convey the passage’s intended meaning.7 The second would be to understand the passage as indicating that Jesus is the glory of God, yielding something like, “and the appearing of [him who is] the glory of our great God and Savior, [namely] Jesus Christ.” Although Prof. Harris admits this understanding struck him as initially appealing, he ultimately rejects this translation also.8

In the case of Titus 2:13, Prof. Harris concludes that “Ἰησοῦ Χριστοῦ” (Jesus Christ) stands in apposition to “θεοῦ καὶ σωτῆρος” (God and Savior), rather than “τῆς δόξης” (the glory). And so the grammar of the passage demands that it be understood to mean, “the appearing of the glory of our great God and Savior Jesus Christ.”11

Our professor’s analysis also shows that Paul uses a formula common in first-century Judaism, “θεοῦ καὶ σωτῆρος” (God and Savior). For Jews both in Palestine and the Diaspora, these are two titles of one and the same deity: YHWH.12 Because it is Ἰησοῦ Χριστοῦ standing in apposition to this two-titled formula for God, we are confident that “Jesus Christ” is “our great God and Savior,” whose glorious appearing we look for and await.

There’s more! The noun σωτῆρος lacks the article (τοῦ) – in grammatical parlance, σωτῆρος is “anarthrous.”13 This is significant. In the course of his analysis, Prof. Harris summarizes what has come to be known as “Granville Sharp’s Rule.” He explains, “two coordinate nouns referring to the same person are customarily linked by a single article.… The most satisfactory explanation of the anarthrous σωτῆρος … indicates that the nouns (θεοῦ, σωτῆρος) … have a single referent.”14

In our passage, the noun θεοῦ has the article τοῦ. The noun σωτῆρος, linked to θεοῦ by καὶ (and) is without the article. Therefore, these two titles do not refer to two persons, but to one. According to Titus 2:13, who is Jesus Christ? Our great God and Savior!15

The word order in Titus 2:13 places the possessive determiner ἡμῶν (our) following the phrase “τοῦ μεγάλου θεοῦ καὶ σωτῆρος.” In 2 Peter 1:1, however, ἡμῶν follows τοῦ θεοῦ and precedes καὶ σωτῆρος. We must inquire: even though θεοῦ in 2 Peter 1:1 has the article τοῦ and σωτῆρος is anarthrous, does the different placement of ἡμῶν change the number of persons from one (as per Granville Sharp’s Rule) to two persons?

[W]hen two substantives are under the vinculum [bond or tie] of a single article, a personal pronoun applies to both, whether it precedes both or follows either of the substantives. Thus one finds three times elsewhere in 2 Peter (1:11; 2:20; 3:18) “τοῦ κυρίου ἡμῶν καὶ σωτῆρος Ἰησοῦ Χριστοῦ” (of our Lord and Savior Jesus Christ) where no commentator distinguishes κυρίος (κυρίου) from σωτήρ (σωτῆρος).17

Therefore, since there is no article (τοῦ) added to σωτῆρος,18 and since the two substantives (θεοῦ and σωτῆρος) are under the bond of the single article τοῦ, we can confidently understand Peter to mean, “by the righteousness of our God and Savior Jesus Christ.”19 We now know that the possessive determiner ἡμῶν applies to both God (θεοῦ) and Savior (σωτῆρος) even though ἡμῶν follows only the first noun (θεοῦ).

As in Titus 2:13, in the first verse of his second epistle, Peter places Ἰησοῦ Χριστοῦ in apposition to θεοῦ καὶ σωτῆρος, the formula in common in the first century to refer to one and the same deity20 understood by the Jews to be the LORD who is One.21 Prof. Harris is convinced that “in 2 Peter 1:1 the title ὁ θεὸς ἡμῶν καὶ σωτήρ is applied to Jesus Christ.”22 He writes that this “conclusion seems inescapable.”23

Relatively soon after beginning Greek lessons two years ago, I heard it said, “John 1:1, John 20:28, and Hebrews 1:824 are ‘a grammarian’s three Scripture proofs that Jesus is God.’” Now that I have read Murray J. Harris’ analysis of Titus 2:13 and 2 Peter 1:1, I submit for consideration “a grammarian’s five Scripture proofs.”